Report on PranaWire Arhat Jumper Cables
"details, air and a dynamic scale to die for"

"Here are my first impressions after some hours of listening...
Until now, my jumpers were the - - Reference that, I and most retailers, consider as reference cables.

The ARHAT jumper cables are simply in a far different league: so much better in every sense that I am stunned to hear such an improvement with just a new cable of 30 cm - completely awesome.

The first thing that changed is the world of details, air and a dynamic scale to die for. Listening to Henri Dutilleux Metaboles, I am immersed in a 3D volume of air that connects me to the hall. Then perfect transients spring from the silence with an unknown purity. All the sessions are as rewarding as a live session in terms of dynamics and rightness of the tones. I think again of the importance of real transparency, a sense of "being there" with the event.

Listening to AHMAD JAMAL Live at the Olympia, I discover the recording again, especially the sense of detail that enlightened the musical scene. I hear for the first time, a cymbal that makes a perfect attack and decay while AHMAD is singing and playing piano. Nothing is blurred, notes are so precise and delineated. On Organ music, bass transparency and extension is surprising, with much more power and control. This makes a real foundation for the music.

"...the PranaWire Photon USB demonstrated superiority in key areas, including transparency, ease, naturalness ﻿of present﻿ation, and exceptional spatiality. The improved detail was notable. Overall, there was a transformation of DSD file sources, making their clear superiority even more evident."


"Scale, dynamics/extension, presence, body etc were vastly improved all while maintaining accuracy from top to bottom (critical for my taste). What was most attractive to me was the clarity, focus and detail."

"Simply put, the PranaWires are without question the most musically expressive cables I've ever had in my own system. Their sonic achievement represents a degree of performance I would not have though obtainable through the installation of "mere" cables. "
Greg Weaver, Positive-Feedback.com Issue 25

"Dulce Pontes always is excellent to assess system quality. Her voice can be piercing and crack the enamel right off your teeth if anything is wrong. With the Linebacker in place, her Momentos album was pure joy...In our tests through various setups with their inherent noise-generating capabilities plus external noise sources, each time the Linebacker was included, calmness and quiet entered the scene and unrest and indecision left the building." Marja & Henk, 6Moons Audio September 2012

"I just wanted to say again that I am really enjoying the LineBacker. Whatever magic JuJu you've got stuffed into that thing is working very well - congratulations!"

"Greatest system improvement from any single item that I have ever heard in my many, many years in this hobby. My descriptor is, "Recording Realism Recoverer." An extraordinary amount of details unmasked. Clarity, clarity . . ." 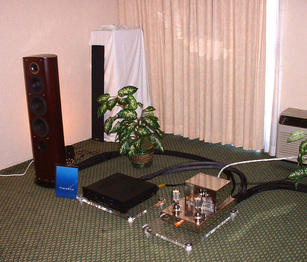 The Pranawire/deHavilland/Nola room always sounds among the very best. The tricks Kara Chaffee and Joe Cohen pull off time and again belie the adage that rooms at shows cannot work properly and consistently each time. Well, some exhibitors can. Here, the Nola loudspeakers were set up at an angle, the imaginary line between both speakers not parallel to the front wall nor the back wall. Try this at home and observe the result. Playing "Navigatore" via the Russian GM70-powered amplifiers from a Sony CD player produced the tightest sound of the show. No ringing whatsoever - a hit to a drum had a definite beginning and end. The sound possessed no inherent sweetness but as with a good champagne, it can never be too dry. Nuances and articulation were presented with a sense of natural innocence.

Srajan Ebaen of 6moons.com
on the PranaWire, deHavillandroom at CES2004 -
one of his three favorite rooms at CES2004

"...presence, fullness and the unassailable power of communi-cativeness."

"Important attributes that accompanied my top three rooms? A sense of billowing flow that subtracted even the faintest trace of electronic texture; presence, fullness and the unassailable power of communi-cativeness. The easiest way to check for these qualities? A sense of suspension while you're listening. It's as though the totality of your being was addressed. This obliterates distractions, thoughts, watchfulness, internal commentary and the accompanying distance of the critical observer. Then when the music stops, listen inside. Is there a living feeling inside your body, a lingering aroma just like upon waking from a truly sweet dream? Did this system trigger not just isolated parts in you but rather, engulf more of you and this to a greater, more complete and fulfilling extent?"

Srajan Ebaen of 6moons.com
on the PranaWire, deHavillandroom at CES2004 -
describing qualities common to his three favorite rooms at CES2004

"...anyone who claims that cables don't make a difference clearly occupies a different moon than this listener." 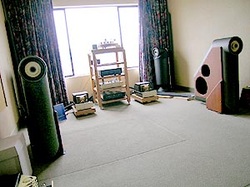 "...this room triggered me in the same fashion each time I hunkered down. ...the music here caused me to have literal out-of-body experiences."

Srajan Ebaen of 6moons.com
on the PranaWire, deHavilland, Rethm room at VSAC2003

"...the essential quality of raw silk was palpable, with a free-floating diaphanous soundstage and excellent low-level ambience retrieval."

Srajan Ebaen of 6moons.com
on the PranaWire, deHavilland, Alon room at HE2003

"This genially extended system easily handled everything I threw at it, with exceptional snap, crackle and pop, remaining clear, coherent and dynamic even when pushed to higher volume levels, to effortlessly portray a warm, capacious soundstage in this crappy little hotel room."

Chip Stern on
on the PranaWire, deHavilland, Alon room at HE2003

"...without question the most musically expressive cables I've ever had in my own system."

"Simply put, the PranaWires are without question the most musically expressive cables I've ever had in my own system. Their sonic achievement represents a degree of performance I would not have though obtainable through the installation of "mere" cables. "

Greg Weaver, Positive-Feedback.com Issue 25""...a strong recommendation to those looking for the best of the best."

"Want a lifelike sense of palpability? Want depth and width to a soundstage? You got it... I heard a very deep soundfield that extended behind the speakers quite a bit, even beyond the rear wall, which pretty much disappeared, as did the side walls. The Nataraja cables produced the biggest soundstage I have heard in my room. The sound simply swelled with little or no perceived limitations to its size. Not to suggest monstrous images, but music was not tethered to the speakers or limited by the wall boundaries. Images were very coherent and palpable, exceeding either of my reference cables."

"...what I was hearing was as close to a concert hall experience as I have ever come without being in a concert hall. Truly amazing."

PranaWire / Dehavilland Electric Amplifier Co. - Last year I picked the deHavilland room as "Best Sound of Show". I would do the same again this year, except that deHavilland had an unfair advantage. As their source, they had an Ampex 351-2 open reel tape recorder that had been modified by Kara Chaffee, deHavilland’s chief designer. The entire playback system consisted of the Ampex feeding a deHavilland Ultraverve preamp, deHavilland GM-70 SET amps, and Alon Lotus Elite Signature speakers all connected with Prana Wire cabling and power cords. Using prerecorded 4 track open reel tapes as the source, the sound was astounding. I was in the room two different times when a Columbia prerecorded tape of Mendelssohn’s 1st Piano Concerto (Serkin/Ormandy/Philadelphia) was played. Both times at the end of the final movement the people in the room stood up and applauded, just as if they were in a concert hall. This is not normal CES behavior. In addition, the second time there were ten people in the room. All ten people sat through the entire three movements of the 1st piano concerto without talking or getting up and leaving. To have ten CES attendees sit silently through an entire concerto is mind boggling as most attendees normally dash in and out of the rooms. What is even more amazing to me is that as I tried to analyze the sound that I was hearing I was not coming up with a list of superlatives. The soundstage was large, but not humongous. The resolution was detailed, but not incredibly so. The instruments were delineated in space, but not as well as some other systems that I had heard that day. Despite these short comings, what I was hearing was as close to a concert hall experience as I have ever come without being in a concert hall. Truly amazing.

"The deHavilland and Prana wire room sounded as musical as all get out! We found this one to be a place to take an extended listen when we had a spare moment. "

"This system...brought me as much musical joy as anything in the show...This was definitely the Room I Wanted to Spend More Time In."

George Kielcyznski of the deHavilland Electric Amplifier Company was exhibiting a very compelling system centered around the deHavilland GM-70 monoblock, a 50-watt amplifier that uses the GM-70 tube, a Soviet version of the 845. (The 845 happens to be my favorite tube of all time ... magical things seem to happen when this tube is in the room.) It turns out that amplifier designer Kara Chaffee is also a whiz with tape decks. She brought an Ampex 351-2 back from the dead, and the results are sure worth it. This system, which also featured Prana Wire from Joe Cohen, brought me as much musical joy as anything in the show, as George played reel-to-reel tapes of Simon and Garfunkel: Parsley, Sage, Rosemary & Thyme. I am intimately familiar with this album, and have never heard it like this. My biggest regret of the show, quite seriously, is that I didn’t spend more time in this room, and didn’t get back there with Stan Ricker. Next year, folks! This was definitely the Room I Wanted to Spend More Time In.